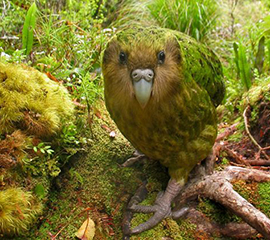 New Zealanders Fight to Pull Back Kakapo from Extinction

7 March 2014 – New Zealanders are pulling out all the stops to save the nation’s second most favourite bird, the kakapo – a friendly, flightless, green feathered parrot that teeters on the edge of extinction.

Currently there are less than 150 kakapos in the world and of this number 126 live in the wild in their native New Zealand.

The kakapo is officially the world’s heaviest parrot with males weighing in comfortably at 2.2kg and females at 1.4kg. They’re sturdy figures with strong legs enabling them to hike and climb around the forest with an idiosyncratic jog-like gait and have, on occasion, been seen climbing trees.

The birds have many fascinating qualities; they emit a distinct subsonic mating boom that can travel several kilometers, they are musked in a musty-sweet odor and often, because of their slow way of life, they live until 90.

It is known that kakapo used to live from the far north of the North Island to the south of the South Island but since the arrival of early M?ori settlers their existence has been under threat as their natural habitat has been cultivated into farmland and homes.

The kakapos fate looked akin to that of the dodo when the Europeans arrived. An influx of people combined with predators such as ferrets, rats and feral cats dwindled away their numbers and in the 1970s it was believed they were already extinct until 200 were found on Stewart Island.

In the 1980s the New Zealand Department of Conservation implemented a Kakapo Recovery Plan in which Kakapos from the mainland were relocated to predator free offshore islands. Here, devoted members of the National Kakapo Team continue to dedicate their time to hand-raising chicks and setting up feeding and incubator stations to keep alive their young.

Their efforts have seen a 68% increase in the kakapo population from 1995 to 2003, preventing the kakapo’s extinction.  It is hoped that with continued support the team can guarantee a future for one of the world’s most remarkable birds.

For more information or to donate visit Kakapo Recovery.