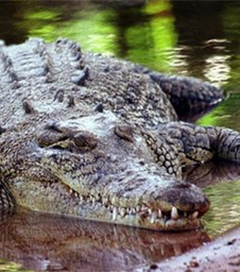 New Zealander Rescued After Being Trapped by Crocodile

A New Zealand kayaker spent two weeks stranded on a small island off the coast of Western Australia after a menacing crocodile refused to let him leave. Each time the man tried to kayak away from Governor Island, the six metre crocodile would stalk him until he returned to the island.

Having originally planned to stay on the island for a while the man arrived with 160 litres of water, some flour and dry food. However he soon realised he was unprepared for the Kimberley wilderness and decided to return to the main land, only to have every attempt thwarted by the crocodile.

The unidentified man was rescued two weeks after arriving on the island by Don Macleod, a local who saw a light on the island and decided to investigate. “He was relieved and shocked, and thankful someone had come along because he was running out of options pretty quickly,” Macleod said.

Macleod described the man’s story as “incredible”. “Every time he got in his little kayak, which was only 2.5m long, this crocodile – who has lived there for many years and is a monster – chased him… He is a very, very lucky man,” said Macleod.