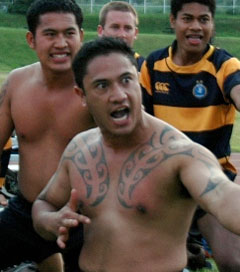 Crew from the Royal New Zealand Navy Frigate Te Mana took on sailors from the USS George Washington aircraft carrier near Yokusuka Naval Base, Japan, in the final of a 10-aside tournament, beating the Americans 36-7. Some 180 New Zealand sailors from the Te Mana were ashore in Yokosuka this week after stopping there on the way to Guam. The Yokosuka tournament is the third rugby match for the Te Mana sailors during the cruise. Te Mana had already played the Singapore Cricket Club and the Hong Kong Rugby Football Club. Te Mana rugby captain, Able Communications Operator Keyn Nepe, 21, said he was impressed by the hard hits dished out by the U.S. players. “They were a lot more physical than we thought they’d be,” Nepe said. “There was a lot of passion.” The New Zealand All Blacks are the reigning world champions of rugby, and will return to the Olympics in 2016 ahead of the 2019 World Cup in Japan.