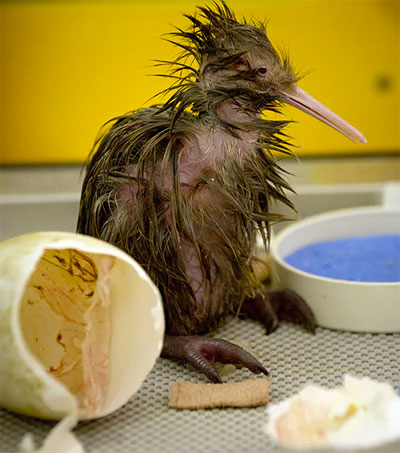 New Zealand Rallies to Save its Iconic Bird

There are 68,000 kiwi left in New Zealand, and they are declining at the rate of 2 per cent per year. A century ago, there were millions. Outside the predator-free zones, kiwi chicks and adults are killed and eaten by dogs and cats, attacked by possums, stoats and rats, and hit by cars at night. The Guardian’s Eleanor Ainge Roy reports from Kapiti Island about the battle for their survival.

“New Zealanders are a shy and reclusive bunch, the kiwi is a bird we identify with,” says Paul O’Shea, an administrator at Kiwis for Kiwi, a conservation group set up to save the bird from extinction.

“It’s as vital to protect the kiwi in New Zealand as it is to protect the orangutan in Borneo, the Sumatran tiger in Indonesia, and the panda in China. Losing these species from the planet might not affect your day-to-day life, but it is a loss to the human experience,” O’Shea says.

These ancient, flightless and nocturnal animals are a wonder to conservationists the world over. They are descended from a “proto-kiwi” that lived about 50 million years ago, they hatch eggs so large they take days to exit their bodies, and are related to the extinct moa, the tetchy cassowary and the emu in Australia (known as the ratite family).

On Kapiti, Emma Neill, state conservation worker, wanders awestruck through the bush. The birdsong is cacophonous and musical, the way mainland New Zealand used to sound.

Predator-free islands and sanctuaries are the highest conservation ranking for protected land in New Zealand, Neill explains. They are patrolled by rangers who live and work alone on the island, poised to tackle any threats: stoats which manage to “raft” over (on driftwood or debris after a storm), rats that stow away on boats, or Argentinian ants in picnic baskets that breach the natural moat, and can swarm on chicks in the nest.

If an invader is detected on the island, they are tracked by trained dogs, trapped and then baited using the controversial 1080 poison.

Neill reckons the Māori worldview is becoming part of the New Zealand identity: we aren’t here to dominate Mother Nature, we’re here to protect it.

“We have something special here in New Zealand, we need to be careful to protect what we have,” she says. “We don’t just want our kids to have to look at our native birds on a chart in a school classroom – of what New Zealand once had.”