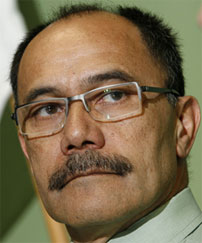 Former Defence Force head Jeremiah (Jerry) Mateparae has been named as New Zealand‘s next Governor-General, succeeding Sir Anand Satyanand on August 31. Mateparae joined the New Zealand Army in 1972 and rose through the ranks to be chief of the Defence Force from 2006 until stepping down this year to head the top secret Government Communications Security Bureau. Mateparae was the first Maori Defence Force chief and will be just the second Maori Governor-General. “I believe he will bring great mana and a wide range of qualities to this role, including judgement, energy and an enthusiasm for encouraging excellence in others,” Prime Minister John Key said. Lieutenant General Jerry Mateparae is from Whanganui and of Ngati Tuwharetoa and Ngati Kahungunu descent.