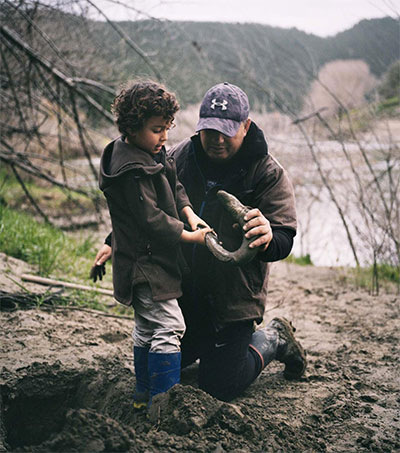 Swelled by myriad tributaries, the Whanganui River twists like an eel through mountainous country – part of it a national park – on its 289-km journey to the sea, reports Kennedy Warne, New Zealand correspondent for National Geographic since 2000. Travel the precipitous River Road, and far below you will see canoeists drifting down the placid reaches, at one with the current and its cargo of flotsam and foam, then digging their paddles deep to hurtle through a rapid.

This is the river that for more than 700 years the Whanganui tribes controlled, cared for, and depended on. It is their awa tupua – their river of sacred power. But when European settlers arrived in the mid-1800s, the tribes’ traditional authority was undermined – and finally extinguished by government decree.

Since then, they have watched their river be degraded and disgraced, even as it was feted as a scenic wonder – “The Rhine of New Zealand”. Its rapids were dynamited to create easier passage for tourist paddle steamers. Its gravel was extracted for railway ballast and road metal, damaging the river’s bed and harming its fisheries. Its mouth became a drain for a city’s effluent.

But on 20 March 2017, something remarkable happened. New Zealand recognised in law what Māori had been insisting all along: The river is a living being. Parliament passed legislation declaring that Te Awa Tupua – the river and all its physical and metaphysical elements – is an indivisible, living whole, and henceforth possesses “all the rights, powers, duties, and liabilities” of a legal person.

For Māori leaders, the focus on legal rights is misplaced. What matters is a new orientation of humans to the natural world, one based not on rights but responsibilities.

Chair of the governance body for the Whanganui tribes Gerrard Albert (pictured) reflects on what the legal personhood status signifies to the Māori.

The Crown says it “seeks to atone for its past wrongs and begin the process of healing”. The Te Awa Tupua act, it says, represents “the beginning of a renewed and enduring relationship”, with the river at its centre.

What does the legislation achieve, then?

“Considering where we are globally, environmentally, if my child is standing on a cliff about to fall off, does it matter if I get to grab that child to stop them falling or someone else does?” he asks “We have a saying: ‘The small streams and the large streams flow together’. That’s a metaphor for communities. We’re all responsible for the welfare of the river.”

Kennedy Warne co-founded New Zealand Geographic in 1988. His book Tuhoe: Portrait of a Nation explores one of New Zealand’s other legal persons: the area of forest known as Te Urewera.

Mathias Svold is a documentary photographer based in Denmark. He pursues long-and short-term projects about the relationship between the climate, nature, and culture. Mathias photographed this story as a National Geographic’s summer intern in 2018. Follow him on Instagram @mathiassvold.