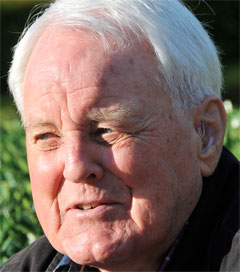 Timaru-born emeritus professor William “Bill” Hawker is in Port Macquarie for six weeks as the guest conductor of Hastings Choristers. The academic and musician lives in Akolele on the south coast of NSW. He says he has always had an interest in music. “I’ve never been able to do anything useful, except for music,” he says. “I played piano and pipe organ and realised that if you really love what you’re doing you can be tremendously lucky.”

After concluding his studies Hawker translated his love of music to assisting people in need. “I formed a choir in a disadvantaged suburb of Christchurch which became my own personal project for a few years.” At the same time Hawker was busy as the accompanist of Christ Harmonic Society, a position he held for five years. “We were asked to represent New Zealand at the Commonwealth Arts Festival in 1965. On that trip I led 153 choristers to London and we performed on the opening night.”

From 1976 until 1979 Hawker headed up the School of the Performing Arts in Adelaide. Hawker’s success as a conductor and academic attracted the attention of influential people in the nation’s capital and in 1979 he was asked to work in Canberra. “I was the assistant director of music at the Canberra School of Music at The Australian National University.” He worked under Ernest Llewelyn until 1994 and served as director of music until 1998.

“When we got [to Akolele] nothing much was happening in terms of classical music so I started the Montague Choristers.” The Montague Choristers perform regularly throughout their local area and invite national and international artists to visit the area. Hawker also started the Visiting Artists Series to attract high calibre professional writers, musicians, painters and sculptors to the area too. “I might be retired, but I’m certainly still very busy,” he says.