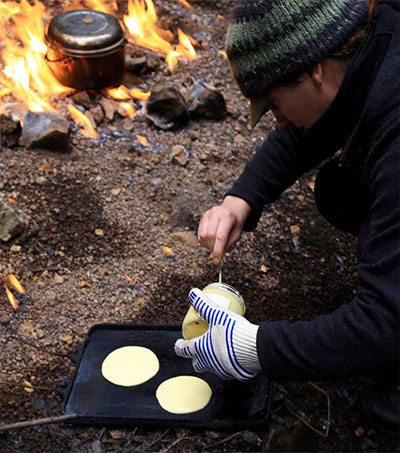 A seemingly typical clear and swift South Island river, the Blackwater has one unmistakable trait: the water carries a whiff of kerosene. It’s faint, but it was enough to give the Blackwater its name, and strong enough to keep the trout away, Naomi Arnold reports for the BBC.

There’s oil buried in these hills, and in a deep fold of beech forest in the Blackwater Valley, the oil feeds a little-known natural phenomenon – if you know where to look.

Locals call it the Gas Blows, but Merve and Shirley Bigden – a small husband-and-wife tour operating team – have named it the Natural Flames Experience. Unknown to most travellers – and indeed to most people outside of Murchison – a bizarre cauldron of bright yellow smokeless flames burns eternally in the bush here, feeding off natural methane gas leaking continuously from the ground.

On a recent winter’s morning, Arnold embarked on the four-hour Natural Flames Experience. After about an hour, the bright yellow flames popped suddenly into view, cradled in a shallow bowl a couple of metres wide.

Guide Shelley Neame dropped a camp pot over the flames, boiled water and added tea. She then placed a skillet on the hot rocks nestled in the flames and cooked pancakes.

A tour with Natural Flames Experience is, writes Arnold, a chance to walk through lush beech and soft moss until you happen suddenly upon them, eventually leaving the fire still crackling and wondering at the power of unseen forces deep in the earth.