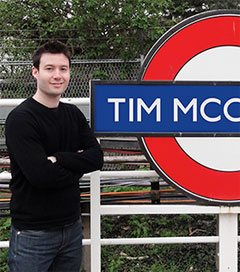 Minding the Gap at All London’s 270 Stations

Auckland-born businessman Tim McCready has been to all 270 London Underground stations after spending seven days spread over five months travelling the entire 250 miles of the Tube network. “When I arrived in Britain [in 2012], we travelled into London on the Tube and I asked several of my English friends if they had visited every station,” McCready explained. “Once they’d finished laughing at me, they told me they hadn’t and that it was a ridiculous idea, which only made me more determined to do it.” The world record for travelling the entire length of all 11 lines stands at 16.5 hours, but McCready wanted to create his own record. “The stations are what interested me,” he said. “What had never been done before was anyone getting off at each platform and having a photo taken next to the station name. This meant that I saw some fascinating things on my journey, and spotted interesting anomalies at each station. “I expected many of them to be identical, but you can see that a real effort has been made over the 150 years of the Tube to add different touches to every one. For instance, did you know that there are five London Underground stations – Barking, Kew Gardens, Richmond, Upminster and Wimbledon – that don’t have the iconic roundel signs installed on their platforms? All of these are in fact National Rail stations served by London Underground.” “My photographer Darren Keane, another Kiwi, and I had to get out at each stop, take a picture, and wait for the next train, which took anything from two minutes to 40 minutes,” he said. McCready made a YouTube video of his exploits that took 50 hours to complete and left him with some fantastic memories of the capital. McCready is co-founder of not-for-profit venture Converge+UK.