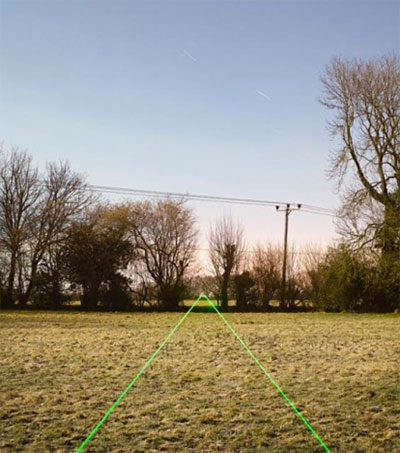 New Zealand-born photographer Mark King, 41, has used state-of-the-art lasers to show how a controversial planned high-speed railway in the UK will cut through the countryside.

King’s photos show two laser beams replicating the track – illustrating in a vivid way just how the HS2 rail line will forever change the landscape in the county of Buckinghamshire in the south east of the country.

He said his work is an “artistic interpretation of something quite fundamentally aggressive”.

“They are beautiful pictures but they are hauntingly beautiful.”

King has lived with his British wife and four-year-old daughter in Old Amersham for about a year.

“Coming from New Zealand I had a natural connection with the landscape.

“I had lived in London since 2000 and when I came here I reconnected with nature and this inspired me to do a new project. While I was travelling around Bucks I came across all these HS2 signs and it hadn’t been on my radar. I thought it could make for an interesting project. I thought about what I could do that has not been done before and looked at ways of making lines on the landscape and finally got to lasers.”

King, who has been named in the 2016/17 prestigious 200 Best Ad Photographers worldwide list by industry magazine Lürzer Archive Magazine, has now invented a way to photograph the lasers, which he is keeping a closely guarded secret.

His work has also attracted the attention of the Telegraph and Country Living magazine.

King completed a graphics and design degree in Auckland.