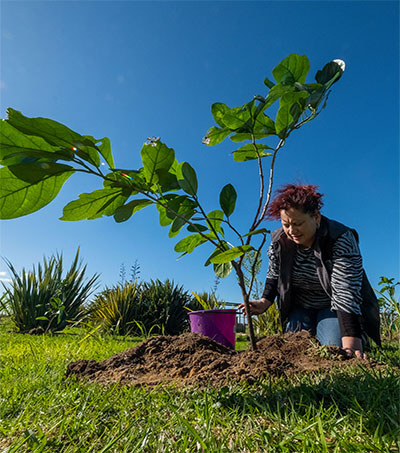 After seven decades of cuttings, failures, plant enzymes, a little coaxing, and a Māori blessing, one of the world’s rarest trees – which lives on a tiny island 64km off the northern edge of New Zealand – might lose its title. And that’s a good thing. Dustin Renwick reports on the cultivation of the kaikōmako for a National Geographic feature.

A team of scientists and Ngāti Kuri, the regional Māori tribe, recently returned from the island Manawatāwhi, where they scoped out potential conservation plans. Ngāti Kuri members even planted 80 kaikōmako saplings on the mainland this year.

Yet those positive developments happened only by answering two important questions. How do you rescue a tree with no mate, and who shares that task? Renwick asks.

Botanists identified one wild specimen in 1945 on the largest of the Three Kings Islands, Manawatāwhi in Māori, which is a little bigger than Manhattan’s Central Park. The tree isn’t simply remote. It’s completely alone.

Four were released on the island in 1889 as a food source for possible shipwreck victims, and the population increased one hundredfold until the invasive animals were eradicated in 1946.

Goats ate several island plant species out of existence, but the kaikōmako survived by way of the classic real estate maxim. Location. In this case, it lived out of reach in a steep boulder field 213m above the ceaseless swells.

Some scientists recognised the kaikōmako as invaluable, a piece of New Zealand’s biological heritage one calamitous storm away from vanishing. Others questioned whether it really was alone; perhaps it was a far-flung individual of an ordinary tree type that didn’t require extra concern.

Experts debated the taxonomy for decades until they settled on Pennantia baylisiana as a unique species. Its genetic relatives are dioecious, meaning they grow male and female flowers on separate plants, an impossible problem for a species with a population of one.

“This one is a peculiarity,” says Geoff Davidson, who previously owned a nursery near Auckland.

Botanist Peter de Lange, then a scientist with the New Zealand Department of Conservation, worked with Janeen Collings, a plant conservation ranger. They designed protocols to prevent the transfer of any pests or diseases from the mainland, including the feared Phytophthora, a group of common soil pathogens infamous for causing the 1840s potato famine in Ireland.

Researchers cleaned kaikōmako seeds – 4000 of them thanks to Davidson’s nurturing – packed them into cold storage, and opened their cargo only after landing on Manawatāwhi.

By 2012, the team had celebrated 65 tiny successes. They had also delivered 500 seeds to Ngāti Kuri in an important act of conservation equity.

Māori believe that when they die, their wairua, or spirit, travels to Manawatāwhi for a final glance back at Aotearoa, their home, New Zealand. The island represents a critical component of that worldview, and the kaikōmako plays a part.

Until several years ago, government authorities had prevented iwi from maintaining traditional practices like guardianship of the islands, according to Sheridan Waitai. She’s the executive director of the Ngāti Kuri Trust Board, which manages her tribe’s relationship with the government.

The kaikōmako “is part of the fabric of life,” Waitai says. “Every species that disappears is a tear in that fabric, in our histories and our cultures.”