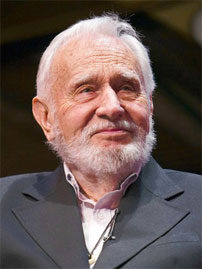 Kerikeri resident Russell Garcia, an California-born arranger, composer and conductor who was an influential figure in the West Coast music scene during the 1950s and ‘60s and whose work in Hollywood included writing the score for the 1960 science-fiction classic The Time Machine, has died. He was 95. The Los Angeles Times’ Dennis McLellan writes: “During his eight-decade career in music, Garcia recorded more than 60 albums under his own name, including the otherworldly sounding Fantastica: Music From Outer Space and the avant-garde jazz album Wigville in the 1950s. Garcia also arranged for artists such as Louis Armstrong, Ella Fitzgerald, Judy Garland, Stan Kenton, Julie London, Anita O’Day, Oscar Peterson, Mel Torme and Margaret Whiting. That included arranging — and conducting — Armstrong and Fitzgerald’s classic 1958 Porgy & Bess album. In 1966, Garcia and his wife sold their home in the Hollywood Hills and most of their possessions and set off on an around-the-world trip on a 41-foot trimaran. They had planned their trip to last for at least three years before returning to Hollywood. But, Gina said, they fell in love with New Zealand after arriving there in late 1971. During his many years in New Zealand, Garcia continued to compose, arrange for various singers and conducted much of his original music with the New Zealand Symphony Orchestra.
In 2009, Garcia and his wife were awarded the New Zealand Order of Merit from the Queen of England for their service to music. The Unquenchable Flame, an opera Garcia wrote in the mid-‘90s with his wife, Gina, who wrote the libretto and lyrics, will have its world premiere in Auckland in July 2012.”