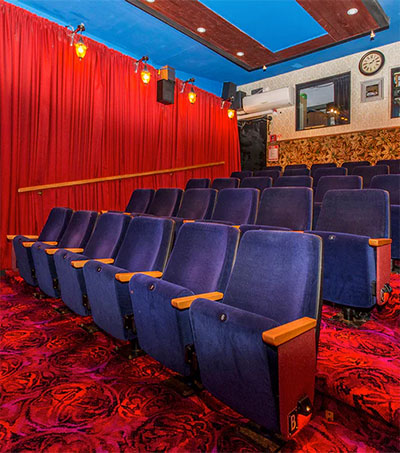 Movie buff John Bell has decided to sell up one of Wellington’s best kept secrets: the Time Cinema in the suburb of Lyall Bay, a fully fledged 38-seat picture theatre where he lovingly screens the classics.

The Time Cinema (housed in a large garden shed) has been a decades-long hobby for this resident of New Zealand suburbia, screening classic and nostalgic films, in particular British and American comedies from the 1940s, 50s and 60s.

Furnishing it with donations from friends and choice finds in local thrift shops, Bell, 74, operates the projector and “talks too much” with visitors, while his wife Margaret serves food and drinks.

Now the couple are looking for someone to carry on their legacy.

“I have always loved the movies’ ability to bring people together, as a social tool, a shared experience,” says Bell, who built most of the cinema himself.

Harcourts said the online listing had attracted thousands of page views and dozens of serious queries, including one from a local who wants to crowdfund to buy the cinema and keep it open to the public.

“We like to screen old classics that take the audience back to their childhood, that spark memories and make people feel younger,” Bell says.