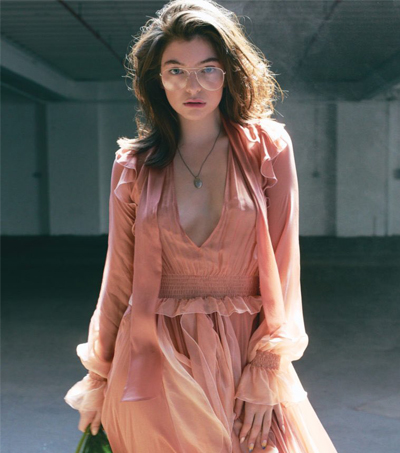 New Zealand singer Lorde “became a household name after the release of her single Royals in 2013. Four years later, she is on the cover of Fashion Magazine’s September issue, where she talked about her latest album, Melodrama. In the interview the 20-year-old singer “spoke about being true to herself.” The Daily Mail reports.

On the cover of the magazine, the singer wears a pink, green and black floral jumpsuit, a patterned black and white coat and a Gucci butterfly encrusted purse, as reported in the Daily Mail.

Melodrama, the Kiwi singer’s latest album, was released last month. She wrote all songs on the album, “with the exception of three- two she co-wrote with Jack Antoff and one with Tove Lo.”

“The two-time Grammy winner said that while she’s ‘hyper-musical,’ she doesn’t ‘really play anything’.”

“I write the songs with different chords because I know exactly what I want chord-wise and then I sing out the chords.” “The process is very much about me having a conversation with myself. It’s a very private process.”

The Fashion Magazine September issue with Lorde will be available on newsstands August 29.