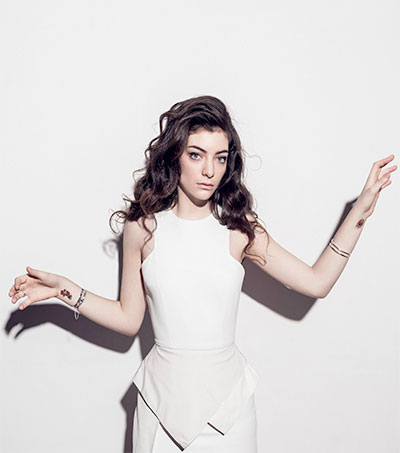 Lorde’s low hum that begins her new single, Yellow Flicker Beat takes the viewer from the final shot of the transformed heroine Katniss Everdeen to the closing credits of The Hunger Games: Mockingjay – Part 1, the soundtrack of which the 18-year-old New Zealander curated.

“I liked the idea of the film ending on this close-up of Katniss’ face, and then this very creepy, cracked hum kind of signalling your entry into her head, her deepest thoughts and secrets,” Lorde says.

It wasn’t completely unfamiliar ground for the teenage songwriter.

“This was my first time writing for a film, and it was important to me that it still felt like my song, not something that would feel out of place at one of my shows.

“I wanted the song to feel almost stream-of-consciousness, very much Katniss’ innermost thoughts, and when writing it, I could feel the lines blurring, my authorial voice overlapping with hers.”

Lorde took over the world last year with the hit Royals, which has been covered live by Bruce Springsteen, and none other than David Bowie told the singer that hearing her was “like listening to tomorrow.”

“I was very fortunate to have been 100 per cent left alone for the curation,” she says of a soundtrack that includes the languid indie pop of singer-songwriter Bat for Lashes, Kanye West reworking Yellow Flicker Beat into something even more menacing, and updated electronica from ‘80s icons Grace Jones and Simon Le Bon. “I had a very clear idea of the kinds of artists I wanted for this project, and the kinds of songs from each.”