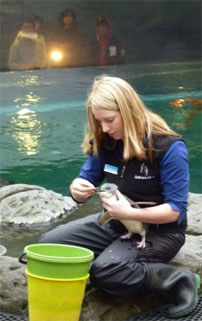 At Christchurch’s International Antarctic Centre 24 Little Blue Penguins are being cared for having been found injured and with no chance of survival in the wild. “Most of them have broken or paralysed flippers, some have eating disabilities so I have to assist them, others have broken beaks,” penguin keeper Mallorie Hackett said. Inhabitants include Elvis, who is completely blind and locates his food by following the rustle of the fish bucket on his enclosure’s gravel, and Bagpipes, a one-legged penguin who sports a modified neoprene beer cooler to keep his stump dry. Conservationist Shirleen Helps who runs eco-tours at a penguin colony on her South Island east coast property said the refuge at the Centre provided an important service by housing injured birds. The Little Blue, also known as the Fairy Penguin, is the smallest of the world’s penguin species, measuring about 25 centimetres tall and weighing one kilogram.