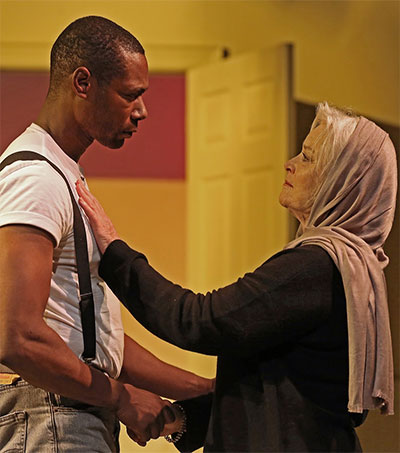 Charles Isherwood writes: “Early on, Volumnia most suavely asks her son to play the politician (read in this context: hypocrite), but it is also she who later seals his dark fate by beseeching him, when others have failed, to abandon his vengeful campaign.

“Harrow brings a regal presence to her role, and her delivery of Shakespeare’s verse is hypnotic in its beauty: What loving son could resist a mother of such commanding eloquence?

“[Director Michael] Sexton’s streamlined production (minor characters are cut), staged on a bare platform with the audience on three sides, won’t just have you sitting in your seat, bemoaning the troubling future of our own country. It will also hold your attention in its own right, through simple but forceful staging and superb acting.”

Harrow, 73, is well known for her roles in British theatre, films and television. She has also performed in theatres throughout the United States. Harrow played journalist Kate Reynolds in 1981’s Omen III: The Final Conflict starring her former husband Sam Neill.

She lives in Vermont.

Coriolanus is on until 20 November.