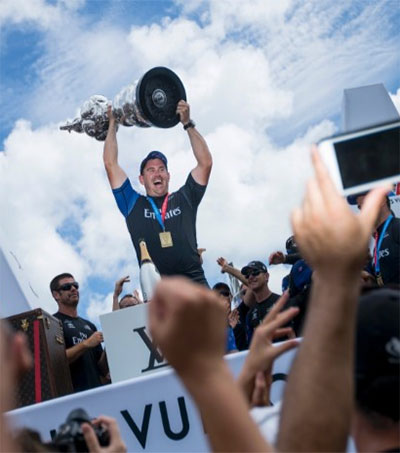 Life After the America’s Cup for Winning Sailors

For Joe Sullivan (pictured) and Simon van Velthooven, an Olympic rower and cyclist respectively before being recruited as “cyclers” to power the New Zealanders’ revolutionary leg-powered winch grinders, the whole America’s Cup experience has been a whirlwind. But as the dust settles a few months on, how do you return to normal life? CNN Sport reports.

Sullivan, 30, took six weeks off to travel and then returned to his day job as a fireman: “On my first week back we had a pretty substantial hotel fire in Auckland. We got everyone out safely but that was quite a change of lifestyle from New Zealand.”

Sullivan, who won Olympic gold in rowing in 2012 before switching to the America’s Cup, told CNN: “My life’s been in three completely different parts. It’s like I’ve ticked off the dream jobs of a five-year-old in New Zealand: Olympics, America’s Cup and a fireman.”

So what’s next? “Well, the way the technology’s going, maybe an astronaut in 20 years time!”

For van Velthooven, a track cycling bronze medalist at the 2012 Olympics, the return to dry land has been more about unfinished business.

At 28, he has no plans to return to cycling as a profession and is aiming to finish a university degree in rural valuation.

“I’ve been a long-time university student,” he explains. “I’d 90 per cent finished my degree seven years ago, so I’m focusing on that.”

For now, the pair are relishing life on dry land, and some of the parties that have followed what proved to be a comfortable Cup win.

But, as van Velthooven puts it: “Life goes on. Admittedly there’s a few more yarns but life still goes on.”