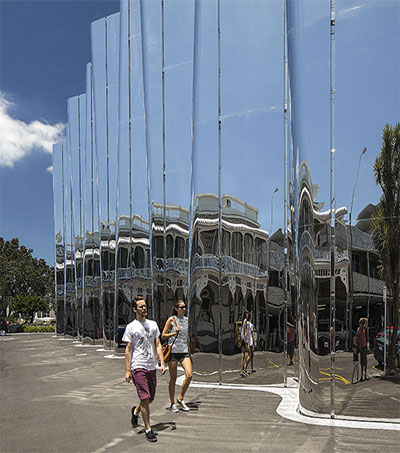 “‘Art,’ wrote the [Christchurch]-born artist Len Lye, ‘is the most valuable and least useful of all things ever made.’ Bearing that in mind, how might you make a museum dedicated to the artist?” Financial Times’ correspondent Edwin Heathcote asks. “By making it valuable but useless – or the opposite, embodying function but eschewing value, a more utilitarian thing?

“One answer to that question stands on a street corner in New Plymouth, a town on New Zealand’s North Island luxuriating in money from a booming energy industry. The Len Lye Centre’s exterior is a wobbly crazy mirror, a curtain of reflecting, polished stainless steel that reveals nothing but reflects the town’s colonial-era architecture back to itself. While mirrored walls might seem a bit of a cop-out, a denial of presence in favour of reflection, a look at the art inside makes this appear a considered, intelligent and elegant response.

“New Zealand architects Pattersons Associates have done a fine job in creating a striking corner and hint at something strange within.

“The Govett-Brewster Art Gallery, of which the Len Lye Centre is now a part, is housed in a 1918 cinema building – once slated for demolition but saved in the 1970s by popular outcry. With the white painted picture house, the mirrored museum, a couple of slightly straggly palm trees and a deep blue sky dazzlingly reflected in the folds of the stainless steel, there’s a hint of LA here, the city captured in a gleaming chrome tail fin. The new and the old building sit surprisingly comfortably together.

“The art itself is so buzzing with ideas that it is almost a relief when the architecture leaves you alone, adding to a hermetic effect of immersion in this omnivorous artist’s oeuvre.

“Ultimately, this is a building defined by its façade. You could argue that is the worst kind of superficiality, actually it is a terrifically effective wrapper for a relatively unassuming institution. This is, in a way, more a building about the city than about its contents, creating an arrestingly dynamic corner and a monument to the country’s most interesting modern artist.”