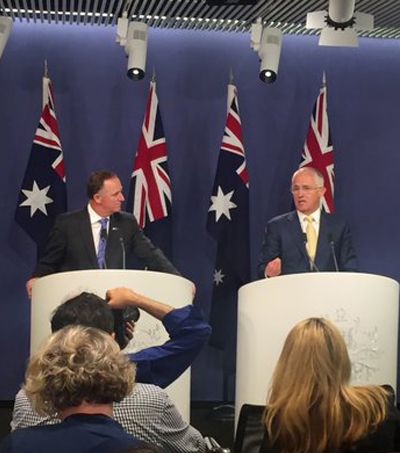 “There has long been anger among New Zealanders at being treated like second-class citizens in Australia,” writes Susan Chenery in an article for The Sydney Morning Herald.

It is estimated that New Zealanders in Australia contribute $5 billion in tax annually. But they cannot vote or claim welfare. And until this year, they could not access student loans.

“They are working and contributing to the economy and paying taxes and levies,” said Tim Gassin, chair of advocacy group Oz Kiwi.

“But while they are covered by Medicare, they are not entitled to access any benefits should they fall on hard times.”

According to Gassin not a lot has changed under February’s new deal between John Key and Malcolm Turnbull.

“New Zealanders who have earned at least $54,000 each year for five years and meet health criteria can apply for a different class of visa – one that would in turn allow them to apply for citizenship. It applies only to special category visa-holders who have arrived in Australia since 2001. No one who arrives after February 19, 2016, will be eligible.”

“Those who are marginalised or struggling will remain so, as will their children. A large number will still be excluded from what Australians consider basic rights,” according to the article.

“No one is suggesting that we go back to the 1970s, when New Zealanders could get off the plane and get on the dole. Back then Bondi was famous for “bludging” New Zealanders taking extended state-sponsored holidays – sometimes for years,” writes Chenery.

But the seemingly arbitrary nature of the bureaucratic process has frustrated many.

New Zealanders who have been injured at work, lost their job or find themselves in situations beyond their control can become homeless.

Because they can fall through the cracks so completely, there are no documented figures of how many are living below the poverty line. According to Vicky Rose, co-ordinator of the Nerang Neighbourhood Centre on the Gold Coast, 50 to 60 percent of the 30 people who seek help from her neighbourhood centre each day are Kiwis.

According to the spokeswoman for the Minister of Social Services, New Zealanders “are provided with more generous entitlements than those provided to people from other countries who do not hold a permanent visa.”

In comparison Australian citizens in New Zealand can vote after one year and claim benefits after two years.