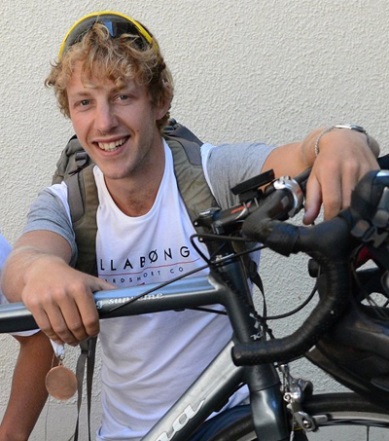 New Zealander Tim Chittock started cycling the roads of India to create a world record on February 27. His goal is to pedal 6,000 kilometres from New Delhi along the Golden Quadrilateral in 20 days.

“India has been one of the most fascinating experiences for me. In fact, the high point of my journey so far is this stunning city of Visakhapatnam. It has one of the most beautiful roads and landscapes I have come across so far,” said Chittock after covering 2,300 kilometres.

His journey began with a challenge when he fell sick and couldn’t eat for several days. Smog, heavy traffic and bad road conditions were other challenges the Kiwi faced. At one point he said he wanted to give up.

“My mom told me that if I give up now, I will forever live with regret,” he said. That gave him back his strength and he cycled on.

“The experience I have gained is priceless and have encountered some very kind and friendly Indians,” he said.

He aims to cover 300 kilometres per day, cycling from 5 a.m. till 9 p.m. with short breaks in between.

Tim Chittock, 25, is a recent University of Waikato Bachelor graduate, who studied Law and Economics. After cycling across Australia and New Zealand – the longest ride being 5,250 kilometres, he went on to look for new adventures. The Kiwi seems to have found that in his quest of making a world record.

In the next few days, the cyclist will cover Chennai, Mumbai, Ahmedabad, Bengaluru, Jaipur, Kanpur, Surat, before ending his trip in New Delhi.