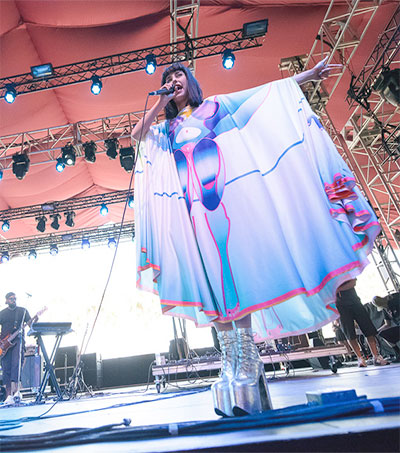 Singer Kimbra was a headline act at this year’s Coachella Valley Music and Arts Festival in California, included alongside big names like Florence and the Machine, Caribou, FKA Twigs and Father John Misty.

For the uninitiated, the New Zealander’s sound is like a mix of jazz, pop, and soul (Kimbra, 25, prefers to call it “rock pop”), and that’s exactly what makes her smooth-sounding voice lend itself so well to a range of other risk-taking artists – most recently American electro group Big Data.

“I like to use structures that are well known in pop music: the verse, chorus, hook, and melodies,” Kimbra tells InStyle. “But the palette of sounds are slightly more experimental than what you might hear on the radio.” The magazine caught up with the singer in the midst of playing back-to-back weekends at Coachella.

Kimbra says when she was growing up in New Zealand she used to listen to a lot of soul and R&B. “Steve Wonder, Michael Jackson, and Prince were big influences for me in terms of writing and performance. Currently, I listen to a lot of St. Vincent. I think she’s extremely innovative.”

“Your Coachella outfits were pretty out-there this year. Do you dress like that in the day-to-day?” InStyle asks.

“I tend to go all out onstage, and my preference generally leans towards vintage. In the early days, I used to buy clothes, rework them, and develop them for performances. I love Jet Rag and Fairfax Market when I’m in LA, but Melbourne has a lot of great stores as well.”