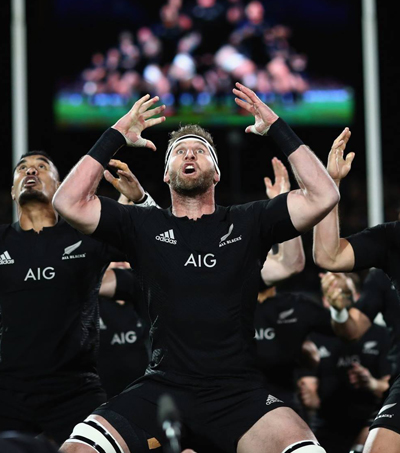 Kieran Read Makes His Mark as All Blacks Captain

“Kieran Read spent a long time learning from Richie McCaw but he always knew he would have to do things his own way if he was to make his mark as All Blacks skipper when the time came to succeed world rugby’s most successful captain,” as reported in an article in The New York Times.

“I learnt a lot from Richie. But from now I want to be my own person. I can’t try to emulate what he’s done. I’ve just got to be Kieran Read,” Read told Fairfax Media last year.

His first year in charge could have been a tricky one with a core group of veterans retiring from international rugby after the 2015 World Cup, which saw more than 600 test caps’ worth of experience disappear from the team.

“But instead of a post-World Cup dip in form, the All Blacks picked up where they had left off, with Read’s side, less conservative than under McCaw, thrashing their fellow southern hemisphere teams with a high-octane attacking approach,” reports the article.

“Read has always seemed destined to become a New Zealand skipper, though not always as an All Black.” “An accomplished top-order batsman, he played senior club cricket in south Auckland at 15. His maturity and ability to fit into an adult environment while still a teenager impressed many of his early coaches.”

“After being lured south to Christchurch, Read took a more academic look at leadership, enrolling in a sports coaching degree at the University of Canterbury.”

“I like growing people and try to get that individual touch with a lot of the lads to get as much out of them as I can. That’s how I like to lead,” said Read.

Read “still uses his pace to great effect but he has also become a brutal defender, a primary lineout target and a key to the All Blacks’ kicking game, either from restarts or to put pressure on the opposition.”

“Captaincy aside he’s the talisman of the forwards,” former number eight Zinzan Brooke wrote in a column for allblacks.com. “This guy brings plenty of leadership qualities and decision making. He’s seriously influential and a proper workhorse who has a bit of x-factor.”

Kieran Read recently re-signed with the All Blacks until 2019.