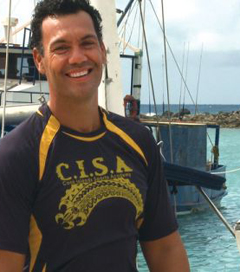 ‘At first glance’ Kevin Iro, New Zealand rugby league great, ‘seems a somewhat unlikely ocean champion,’ writes Islands Business. But you don’t play for the ‘Kiwis’ without learning about hard work, and teamwork. That combination, along with his love of the Cook Islands, saw Iro become the ‘brainchild’ of the Cook Islands Marine Park, reports Islands Business. The Park stretches for 1 million square kilometers – almost half the territorial waters of the Cooks. Iro began to think about the park when he decided to live in the Cook Islands at the end his league career. He wanted his family to enjoy the Cook Islands lifestyle that he remembered as child, when visiting from Auckland. But, when he returned, Iro was shocked by what he saw. Over-development had destroyed many of the coral reefs and over-fishing had severely depleted fish stocks. So Iro went into action. In 2010, as a member of the Cook Islands Tourism Board, he suggested the creation of the park. To get buy-in, Iro used the Internet to get as many people as possible involved in the park’s design. Iro wanted a park that all Cook Islanders could share. This was to be no ordinary marine reserve. Iro’s idea was a multi-purpose park. Some parts of the park would be left untouched, for conservation purposes; others parts would be for sustainable fishing and dive tourism. Iro’s idea quickly gained public and government support. The park was launched in 2012 – a mere two years after it was proposed. Iro attributes the quick progress to the close connection all Cook Islanders have with the waters surrounding them, writes Islands Business. ‘The park has already started to impact the people, with the local leaders seeing it as a way to voice their opinions on how our ocean resources are being managed,” Iro said. Iro wants all Cook Islanders to be the park’s managers. Using an open source system, ‘we’re looking at a design process where a fisherman can contribute as much as the decision-makers in Parliament’, he said. According to the magazine, Iro is excited to see the Cook Islands Marine Park move forward. ‘I think the idea is going to spread through the Pacific,’ he told Islands Business.