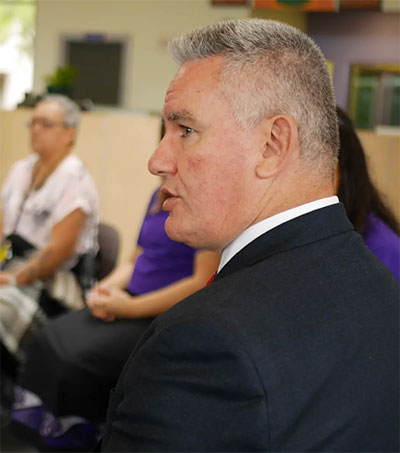 Kelvin Davis on Mission to Keep Māori Out of Prison

Kelvin Davis describes himself as a member of “the most incarcerated tribe in the world”. The former teacher grew up in New Zealand’s deprived Northland region and has seen childhood friends, schoolmates and relatives locked away. Appointed corrections minister in 2017, he is now on a mission to empty our nation’s prisons of Māori inmates.

And after just eight months with Davis in the job, the overall prison population has dropped by 8 per cent.

New Zealand has one of the highest incarceration rates in the OECD, and in March the country’s prison population hit a record 10,820 people – more than 50 per cent of whom are Māori, despite indigenous people making up only 16 per cent of New Zealand’s population.

Davis is from the Ngāpuhi tribe, who account for roughly 50 per cent of New Zealand’s 5000 incarcerated Māori.

“I am told I was the first person to ask to be the minister of corrections. I just believe we can do so much to improve New Zealand if we look after those who have fallen the furthest in the country,” says Davis, who is also deputy leader of the Labour party.

“For decades now the emphasis has been for getting tough on crime and locking people up – it doesn’t work. It is fundamentally a flawed proposition.”

Now, the Labour coalition government, led by Prime Minister Jacinda Ardern, has pledged to cut prison numbers by 30 per cent in 15 years, a goal which the opposition has derided as soft on crime and dangerous for communities.

Despite initial scepticism from the public and some prison experts, in just eight months New Zealand’s prison population has dropped by 8 per cent – with more than 800 inmates released between April and late November.

With each prisoner costing the New Zealand tax-payer about $100,000 a year, the fiscal savings have been huge, even if that is not the main impetus for change.

Dr Liam Martin, a criminologist from Victoria University, has been astounded by the swift reduction, and says it is “striking” that it has been achieved without any legislative change.

“The government is using quite innovative measures that have been really surprising. I wouldn’t have thought they could have done it, and I haven’t heard of it being done like this anywhere else,” Martin says.

Davis says his vision for prison reform won’t convince everyone – he’s relying on his actions to do that. “People I’ve been to school with, people I grew up with, whānau have been to prison,” he says. “I know they’ve done something stupid to get locked up but should we judge people by the worst mistake they’ve ever made? No. We can help these people. And we will.”