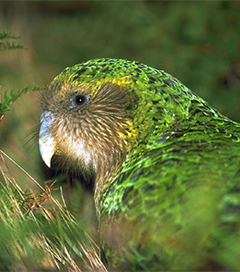 New Zealand’s native kakapo has been thrust into the international spotlight, named as one of just 12 endangered animals to be included on the Ugly Animal Preservation Society’s list of ugliest animals in the world.

The British-based organisation is seeking to raise the profile of some of “Mother Nature’s more aesthetically challenged children” by searching for an “ugly mascot” to face the group. According to the Ugly Animals Society cute, furry mammals have held the world’s attention for too long.

The kakapo – represented by science presenter Steve Mould – is described in the campaign as “encapsulating the fragility of life that had evolved in a bubble”. Because of this it lacks a fear response for predators, instead having a curious nature.

While grateful for the attention the species is getting, Kakapo Recovery Programme manager Deirdre Vercoe was surprised by the bird’s inclusion. “Ugly is the last world I would think of,” said Vercoe. “They’ve got an amazing face.”

However, Mould explained what it is about the bird that got it on the list. “Stephen Fry once described it as an old Victorian gentleman – it’s very human-looking. But it’s not human – and that combination weirdly makes it very ugly indeed.”

To vote visit the Ugly Animal Preservation society website and ‘like’ the film of the species of choice. Voting will remain open until 5.00pm, 11 September.