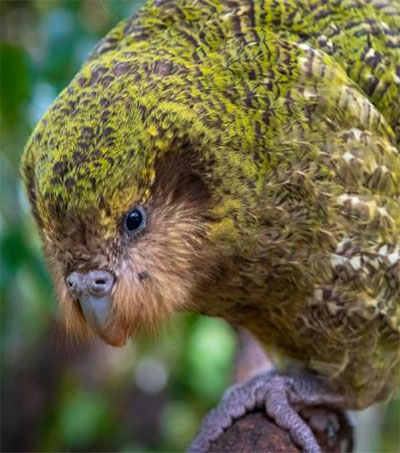 Large, plump and nocturnal, the kākāpō is the only parrot in the world that lives on the ground and cannot fly. There are only 211 in existence, confined to four small islands off the New Zealand coast, Sarah Lazarus reports for CNN. What the kakapo lacks in numbers, it makes up for in personality, radio producer and presenter Alison Balance tells the broadcaster. Her podcast, Kākāpō Files, which documents the fight to save the bird, has attracted listeners from around the world.

“Gorgeous, hilarious and amazing,” the kākāpō has a “serious, but slightly goofy” character, Balance says.

“They’ve got this ancient wisdom thing going on as well. You get the feeling this is a species that has been around for a very long time and is slightly marooned in the modern world.”

Andrew Digby, kākāpō science adviser to the New Zealand government, is on a mission to save the beleaguered bird.

All surviving kākāpō now live on four islands that have been cleared of predators: Whenua Hou, Anchor, Chalky and Hauturu.

Forty per cent of kākāpō eggs are infertile – most likely as a consequence of inbreeding – so Digby and his team have turned to technology to boost success rates.

In some cases, artificial insemination is used to pair specific birds thought to be good genetic matches. This year, the team added a drone to the kit list to speed up the transfer of sperm between teams working with birds in different locations.

Once the females have produced a clutch of eggs, most eggs are removed and placed in incubators. “We tend to be more successful at raising kākāpō eggs than kakapo,” Digby says. “We break less of them.” After hatching, each mother is given only one chick and the rest are hand-reared – to ensure they all receive enough food.

The scientists also use genetic information from the birds to investigate the infertility problem and match breeding pairs to maximise the chances of healthy chicks.

Each bird is microchipped and equipped with a smart radio transmitter, worn like a backpack, that tracks its location, monitors activity, identifies mates and alerts the conservation team if the bird stops moving.

The transmitters also control how much food the birds receive at feeding stations.