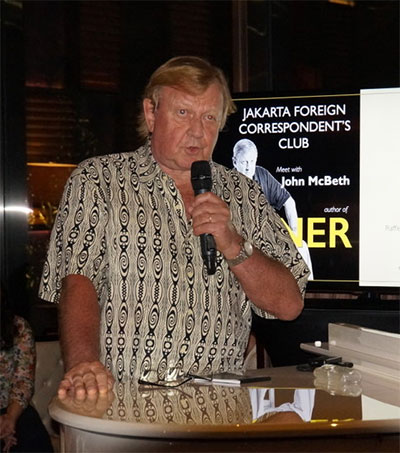 The title is a good indication of the book’s tone: a critical look at Yudhoyono’s two-term presidency. McBeth, who was a regular columnist on Indonesian politics with Singapore’s the Straits Times, considered Yudhoyono’s presidency a profound disappointment in many aspects, especially the clumsy way he handled fuel subsidies, terrorism, corruption and the Bank Century scandal.

“I don’t think I’ve been overly harsh on SBY. There were serious failings in his presidency. It’s my opinion, of course, but the opinion of a man who’s watched this country for 20 years,” McBeth told the Jakarta Globe at his book launch.

McBeth, 72, calls himself a journalist rather than an author.

“I started my career as a reporter. I went out, researched stories and wrote them. I was told to report in an objective and accurate way. That stays with me today. [But] when you write a book, it’s different. Then you’re expected to offer your opinion. Otherwise people won’t read your book. You have to explain to them why you think a particular person was good or bad, especially when that person used to be a president,” McBeth, one of the most senior foreign correspondents in Asia with a career spanning over 40 years, said.

McBeth’s most recent work has appeared in The National (Abu Dhabi), the Nikkei Asian Review, the South China Morning Post and the Australian Strategic Policy Institute’s official blog The Strategist.

He lives in Bali.