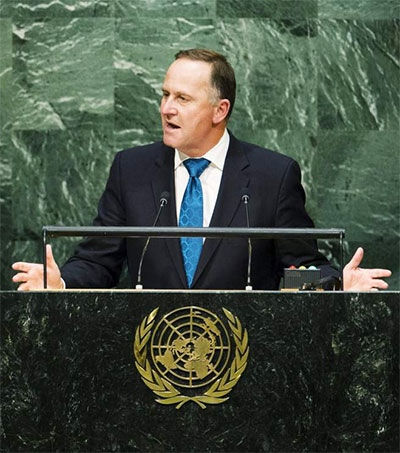 Just hours before Prime Minister John Key addressed the United Nations recently, the National Party leader, who has been in office since 2008, spoke with TIME’s editors about Vladimir Putin, why New Zealand needs a new flag and which world leader has had the greatest influence this year.

TIME asks what Key makes of Vladimir Putin’s latest political posturing. To which he responds:

“He’s just trying to protect his relationship with Assad, and obviously his interests in Syria. So at one level, we don’t like the guy – but we’re making the point that it’s quite clever. He’s catching people a bit flat-footed. Our view is the same as the United States’. We’re not saying there needs to be a regime change on day one, but there’s no acceptable long-term position for Assad to be there.”

“My view is that New Zealanders are immensely proud and patriotic people but, we don’t use our flag to demonstrate that. People are inherently adverse to change, and in the absence of anything else, the default position is to be a little more conservative about those things. The big sporting captains in New Zealand have all pretty much come out in seek change. Because everywhere they go in the world, people wave the flag. In every arena in the world except New Zealand. In New Zealand, they don’t do it. Virtually no New Zealander owns something with the flag on it. Virtually every American does.”