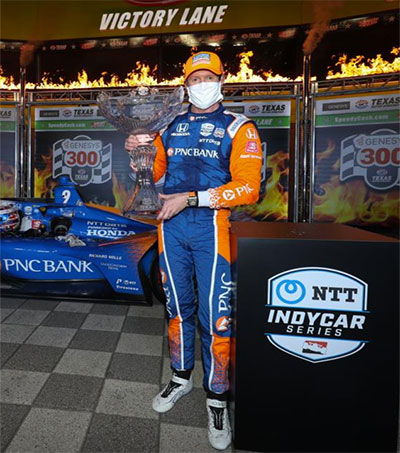 IndyCar packed every bit of its delayed season-opening event into one long, hot day at Fort Worth, Texas without any fans in the stands. New Zealander Scott Dixon was the fastest for most of it at a place he knows well, the Associated Press reports.

Dixon, a five-time IndyCar champion, took the checkered flag at dusk for his fourth win at the 2.4km, high-banked oval, where drivers had also practiced and qualified earlier in the day. The 39-year-old raced to his 47th career victory and matched A.J. Foyt’s record of 18 seasons with a win.

“It was such a team effort,” said Dixon, third on the career wins list behind Foyt’s 67 and Mario Andretti’s 52. “It’s just so fast. Any situation we were in, we could just go for it.”

The massive grandstands that can seat well more than 100,000 people were empty. “It’s rotten that the fans aren’t here. I wish everybody was here to celebrate,” said Dixon, who extended his own record to 16 seasons in a row with a victory.