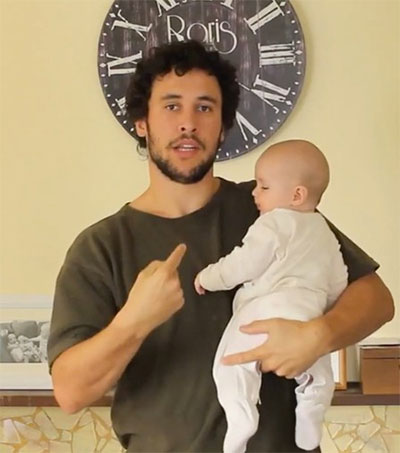 On the How to Dad YouTube channel, shaggy-haired, bearded and bare foot 28-year-old Aucklander Jordan Watson offers “instructional” videos on how to be a parent – with the help of his two young daughters, Mila and Alba.

The project began – as such things often do – with a dopey idea. A mate at work had a baby on the way, so when his partner went out with their eldest daughter and left him with their four-month-old, Watson – a one-time landscaper who now works in TV production – grabbed his camera. He posted How to Hold a Baby online, tagged his friend on Facebook and went to bed.

The next morning, he says, the YouTube notifications kept arriving on his phone: 50k, 100k, 150k. So he made a few more videos – and now there are dozens. The How to Dad Facebook page is heading towards a million fans, a 160-page book is due out, and a web video series is being developed.

“I’m just a typical Kiwi dad. Kind of taken to the extreme in the DIY style,” says Watson, on a recent Sunday family walk, with the girls asleep in the stroller. “People have just connected with it.”

Too many parents these days want to wrap kids in cotton wool, he says. Listen to How to Dad: “Chill out, parents. You don’t have to take it so seriously. They’re made of rubber; they’ll be fine.”

He’s not rich yet, but Watson is working hard on building How to Dad into a global brand. Companies are coming forward to work with him and he has hired a local agent.

Right now, How to Dad is unstoppable. There’s the book, and the web series How to Dad: Legend of the Gumboot (paid for by YouTube and the broadcasting funding agency NZ on Air) is likely to be out by March to coincide with the Gumboot Throwing Competition in Taihape. There’s also the constantly updated Facebook page, and Watson says he is in talks with a US production company on a TV show idea. He’s even looking to do merchandise for Christmas: How to Dad T-shirts and the like.

A blokey empire awaits: “The world is How to Dad’s oyster at the moment.”

Tags: Auckland  Guardian (The)  How to Dad  Jordan Watson