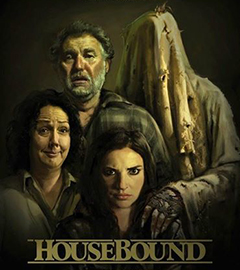 Is the New Zealand horror-comedy back? At the 2014 Sundance Film Festival, Jermaine Clement and Taika Waititi’s vampire mock doc ‘What We Do in the Shadows’ was one of the strongest in the lineup, and little over a month later, kiwi comedy-thriller ‘Housebound’ has debuted to glowing reviews at the prestigious South By Southwest festival (SXSW) in Austin, Texas.

Labelled “magnetic” and “one to look out for” by critics, Housebound tells the story of Kylie Bucknell (Morgana O’Reilly), who is on the receiving end of the most horrific sentencing the New Zealand justice system can deliver. After a bank robbery gone wrong, she is forced to move in with her doting but bumbling mum (Rima Te Wiata) and endure visits from her inept parole officer Amos (Glen-Paul Waru).

Speaking to The Austin Chronicle, first-time director Gerard Johnstone, two-time winner of the 48 hour film festival and writer behind wrote local television show The Jaquie Brown Diaries, spoke of his influences and the reputation New Zealand horror cinema has for “a gloriously sick and weird sense of humour”.

“Peter Jackson has definitely been a big influence on any New Zealander that wants to make films for an audience. I don’t think NZ directors see themselves as being part of any cultural aesthetic though, I’m pretty sure we’re all trying to look like Roman Polanski but due to the low budget, it still ends up looking like Bad Taste.”

Critics at fangoria.com said the film found “a sweet spot between an absolutely hilarious and properly eerie experience.

“Johnstone possesses some real chops as far as Gothic atmosphere and comedic timing are concerned, and lead Morgana O’Reilly is magnetic and likely has the best facial reactions onscreen this year.”