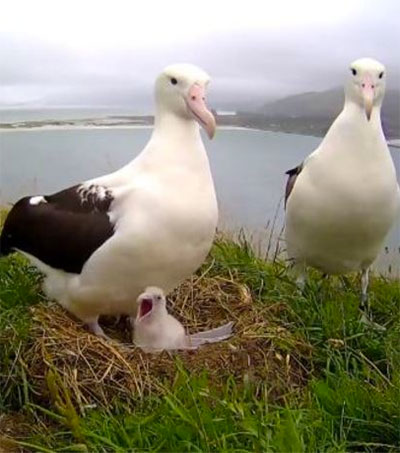 Hopes Webcam Can save Endangered Albatross

Millions of amateur naturalists around the world have been tuning in to the secret lives of albatrosses as Department of Conversation (DOC) rangers on the Otago Peninsula employ YouTube in a bid to save the mysterious giant sea birds.

New Zealand conservation teams set up a 24-hour live-stream of an albatross nest at Taiaroa Head in 2016. Three years on, the feed, called RoyalCam, has become an unexpected global hit, with 2.3 million people from 190 countries tuning in to watch the endangered birds rear their chicks on a frigid peninsula at the bottom of the world.

“Someone somewhere in the world is watching 24 hours a day,” DOC ranger Jim Watts says.

“People watch it in hospitals, in nursing homes. There’s a real intimacy to watching the chicks grow – people fall in love and become invested.”

The northern royal albatross – or toroa – is endemic to New Zealand and is under threat from climate change, fly-strike disease and heat stress. The birds have been described as “casualties on the frontline” of the war against plastic, as they mainly feed by swooping down on squid in the ocean – and often mistake brightly coloured plastic for prey.

The estimated total population of northern royal albatross is 17,000, and with intensive intervention the Taiaroa Head population has doubled since 1990. But that protected colony represents only 1 per cent of the total population, and their small New Zealand home has become “crucial” to conservation efforts as they are the only managed and quantifiable settlement of the rare and endangered birds in the world.

The other 99 per cent of toroa live on remote sub-antarctic Chatham Islands and have never been accurately counted or managed, though survey drone flights are planned in the near future.

Watts says the 24/7 coverage from the camera has provided valuable insights into the lives of the elusive birds, and has the capacity to ensure more vulnerable chicks reach adulthood.