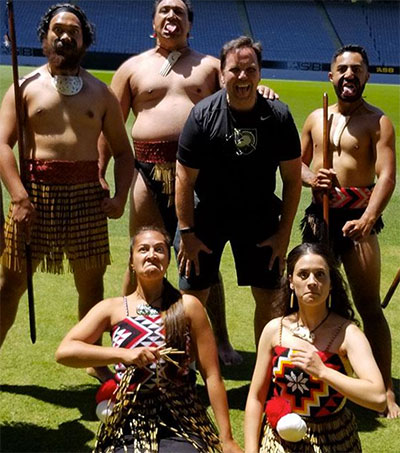 Honouring the Historic for Business Sake

“Even if you’re familiar with the All Blacks, you probably still weren’t aware of their dominant 77 per cent winning percentage against the planet over the last century. What you’re probably familiar with is the head turning, attention-grabbing, pre-match chant known as the haka,” American sports journalist Don Yaeger writes in an article about leadership strategy for Forbes.

“Earlier this year I flew out to spend time with leaders and legends from the New Zealand All Blacks rugby team,” Yaeger writes for the publication. “Just this month, the team opened play in the Rugby World Cup by defeating South Africa 23-13, and they’re eyeing a third consecutive World Cup title – something that’s never been done before.

“In 1905 [Ka Mate Ka Mate] became the battle cry for the All Blacks. Most importantly, it became their identity. Through the haka, New Zealand rugby owned its history – embraced and protected the chanting of the haka as they would go on defeating the rest of the world.

“But in 2004, the team and head coach Sir Graham Henry owned a pivotal moment in their haka history. That single moment created a change that spearheaded more dominant victories and a win rate that peaked above 92 per cent.

“You see, New Zealand rugby had hit a lull – dropping from the number one ranking in the world down to third. For a country that loves this sport, that’s disastrous. They went to play a tournament in South Africa called the Tri-Nations, between South Africa, Australia, and New Zealand – and they finished 3rd out of 3 teams. However, despite the last place finish, the post-match revelry was filled with laughter and debauchery – players were drinking as if they were indifferent about the terrible finish.

“Henry brought in Derek Lardelli, an expert in tikanga Māori, to meet with the team. After talking about the haka and its history, Henry then announced to the club that they were going to rewrite the haka. With the help of Lardelli, the players and coaches would craft a haka that reflected who they were and how they wanted to be remembered.

“They debuted their new haka, Kapa O Pango, before the 2005 Tri-Nations tournament. That year, the All Blacks won.

“What I love about this story is how the coach, the players, and the history of the island came together to create something new, while honouring something historic. So often, our companies and organisations find themselves at a crossroad – the mission that motivated us yesterday no longer motivates us today. And while we often challenge ourselves to just tighten our chinstraps and dig a little deeper, sometimes, a bigger change is needed.

“For the All Blacks it was the Kapa O Pango; but I wonder, what might it be for your company? Are you willing to rewrite your mission in order to save it?

“It’s a question worth considering, and if you find you need a little inspiration, I have just the thing: the All Blacks next World Cup match is Wednesday 2 October. Give it a watch. Let their passion inspire yours.

“I spent time with the most bad-ass team on the planet, and it gave me a new perspective on my own mission to pursue and study Greatness. If you’ll give them a chance, they might just do the same thing for you.”