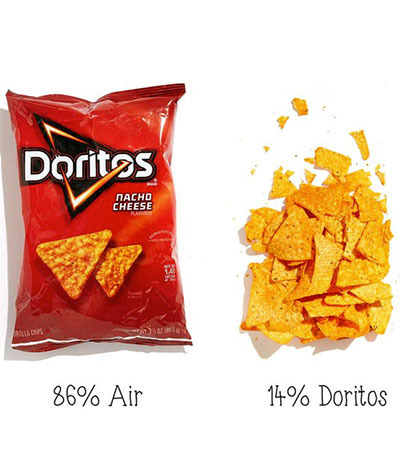 Henry Hargreaves Lets the Air out of the Chip Bag

New Zealand-born artist Henry Hargreaves was so frustrated with the problem of empty space in a packet of chips that he decided to size up some of the worst offenders, calculating the difference between the volume of air in a packet and the amount of snack.

It’s a deflating feeling: you open a bag of crisps, and the air rushes out, leaving a few underwhelming crumbs at the bottom of a huge packet.

This wasted space has now become the feature of Hargreaves. “Over the years of being a consumer and buying crisps I was constantly being disappointed with the value for money. And eventually I snapped,” Hargreaves says. “Packaging and the display of food has become an illusion and a fantasy.

“My hypothesis was that there might be 50 per cent air in the worst offenders, not 87 per cent,” he says.

Hargreaves calculated the volume of each filled bag by submerging them under water and then monitoring the displacement. He then vacuum-sealed the contents in another bag and compared the difference.

In fact, bags of crisps are not filled with atmospheric air but nitrogen, because the oxygen in air would cause the crisps to go soft. Nitrogen gives the product a longer shelf life, and a 1994 study suggested that it makes the crisps tastier.