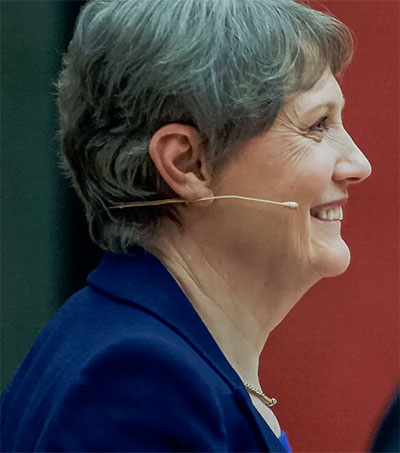 Helen Clark Hit Her First Glass Ceiling at the UN

Former New Zealand prime minister Helen Clark says the rejection of her bid to become the next UN secretary general was a blow for women, but the security council weren’t looking for an “independent-minded leader”. Clark’s experience of the process is the subject of fellow New Zealander Gaylene Preston’s documentary, My Year with Helen, which has just screened as part of the 2017 Sydney Film Festival.

What thoughts or feelings did she have, watching her failed bid unfold again, from within the audience?

“You know, I’ve always had a capacity to move on from things very fast,” Clark says. “That was a pretty intense six-month period and at the end of it I shut the door, went home to see my family and got on with life.”

As prime minister of New Zealand from 1999 to 2008, Clark had a reputation as a pragmatist, led by her values on decisions such as to stay out of the Iraq war and to accept refugees from Australia. In an interview looking back on her leadership, New Zealand’s public service broadcaster called her “The Commander”.

“Such was her dominance, if Clark said something out loud, then it would happen.”

New Zealand certainly rallied behind her bid for the top UN post, in part because of her active and personable presence on social media.

Far from the “exasperating circumstances wherein she hit at the glass ceiling at the UN”, Clark recalls her own political career as being free of boundaries.

“Coming from New Zealand, I’m not used to having any ceiling and where there was one I broke through, all my life,” she says. She was the second female prime minister (the first to be elected), she points out; three women have served as governor general and women have held top jobs in the public and private sector. “New Zealanders are used to having women leaders, not just prime ministers.”

For now Clark has no formal vehicle for her own efforts to do good, with her resignation from the UNDP having taken effect in April, at the end of her second four-year term. She told Lateline she was “not looking for a full-time job”. “The diary is full … I’m just picking and choosing what I want to do.”

Photo by My Year with Helen.