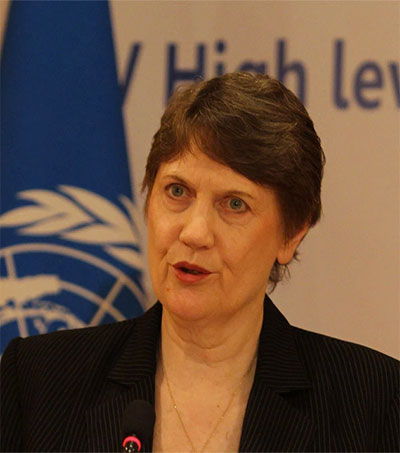 Helen Clark Comments on 70 Years of the UN

As the UN marks the 70th anniversary of its founding this autumn, those imperfections – and how the UN addresses them – have come to the fore as the organisation struggles to define its role in the 21st century. According to Chris McGreal for the Guardian, it is “bloated, undemocratic – and very expensive”. United Nations Development Program (UNDP) head Helen Clark comments.

The most powerful woman at the UN, Clark dealt with the organisation from the outside as prime minister of New Zealand. She said that as the leader of a small country she valued being able to use the UN’s size and resources to deliver New Zealand’s aid programme, such as emergency assistance to Indonesia after the 2004 tsunami.

But once she started work at the UNDP six years ago she was less impressed. “When I arrived, the organisation was a little over a year into its first ever strategic plan. What that tells you is that modern management and modern strategic planning was late coming to the UN,” she said. Clark laughed as she said the plan she was presented with was so broad in its goals that it made no sense.

The drag on reform comes from different directions. Some UN agencies resist it.

Clark chairs the UN Development Group, an umbrella of major agencies, where she is responsible for implementing Delivering as One. “When I started learning about the arcane intricacies of Delivering as One, there were criticisms that it was very bureaucratic and process oriented. I have to say I believe there was some truth in those criticisms,” she said.

She introduced a system, known as standard operating procedures, which she said was aimed at “not having the whole working together effort drowned in process”. “It hasn’t been easy because there are many different agencies involved and they have all developed over the years their own procedures and ways of working. It has required long and patient negotiation to get to the point of having standard operating procedures. It couldn’t just be decreed because no one has the power to decree it,” she said.

But the bigger obstacle to reform perhaps comes from the UN members states themselves.