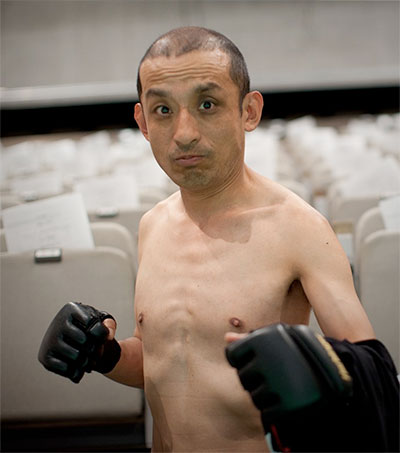 A documentary about a small troupe of Tokyo wrestlers with disabilities made by New Zealander Heath Cozens will premiere at the Hot Docs Film Festival in Toronto on 27 April.

Five years in the making, the film follows the story of Shintaro Yano (pictured), a janitor with cerebral palsy who moonlights as a wrestler called Sambo for Doglegs – the name of the group and the title of the film.

Director Cozens, who lived in Japan for 18 years, said he was aware that the subject matter of the film could draw negative reactions. He said he himself was wary that Doglegs could be exploitative when he first heard about the group in 2010.

But he said he was immediately transfixed and moved by the grappling he saw in the ring, where fighters with various disabilities exchanged real blows in fierce bouts tinged with black humour, sometimes drawing blood as supporters and family members cheered on.

“I discovered that I had preconceptions and prejudices – politically correct prejudices,” he said. “So I hope that people can avoid a knee-jerk reaction to the controversial topic of the film and allow themselves to go on a ride with me.”

He is now based in New York.