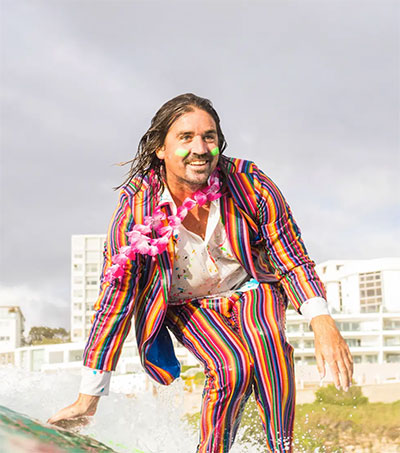 New Zealand-born Grant Trebilco, who lives in Bondi, is one of the five subjects of Melbourne director Genevieve Bailey’s feature film Happy Sad Man, which investigates how men, who represent 75 per cent of those who kill themselves in Australia, navigate emotional ups and downs. The film’s male subjects have all suffered forms of anxiety and depression. Steve Dow reports for The Guardian.

A keen surfer, Trebilco’s life spiralled after a breakup with a girlfriend. He “lost all sense of reality”: he walked into his workplace dressed as a Mexican tequila farmer, declaring he wanted to quit his job to start a charity called Where the Party At. He then paddled into a surfing contest semi-final he had not officially entered on a stolen board, under the illusion he was raising funds for charity.

Handcuffed by police on the beach, Trebilco was hospitalised for 10 days under heavy sedation. He was diagnosed with bipolar disorder and only later realised he had been suffering from psychosis.

Now taking two types of medication, Trebilco’s “recipe” for looking after himself involves acknowledging he will have the illness for the rest of his life. He trains at the gym and values his sleep, and knows he needs regular professional “check-ups from the neck up”, he says.

“The difference is I don’t fight [bipolar] anymore. A key part of my recipe is surfing, but you can’t be in the ocean all day, so I need to talk about it, and I need to be surrounded by good people.”

Trebilco says people who sense a loved one is struggling with their mental health just need to “be there, give them a hug, let them talk it out, listen and then ask how you can help. ‘Can I take you to a doctor?’ is a hard question to ask, but just check in. The biggest thing you can do to start that conversation is be completely honest about how you’re feeling. If you tell someone you’re doing it a bit tough, you’re opening up the doors for your friends and family to say they’re not OK, and then you can help each other out.”

Happy Sad Man is screening in cinemas around Australia in November.