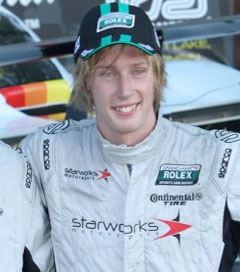 “He’s had a lot of open wheel success [in Europe],” Baron said, beginning a lengthy countdown of Hartley’s racing accomplishments. “He was in the Red Bull driver program, he was a reserve driver for Toro Rosso, he’s now with the Mercedes [Formula 1] testing program.”

The victory gave Hartley his third straight top-five finish and his first in Grand-Am.

“It was a massive relief to get the win,” Hartley said. “The Starworks car has been incredible all year. It’s been quick. We’ve had quite a few fastest laps. But for everything to finally come together, it was a real special feeling.”

A life-long open-wheeler, he says he loves the sports cars. He says he doesn’t know what the future will bring, saying a return to single-seaters is always an option.