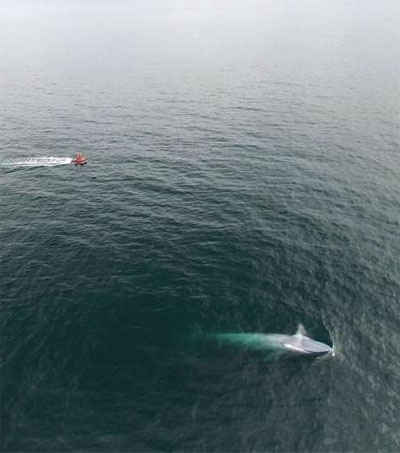 A new population of at least 700 blue whales has been found living between the North and South Islands. The gigantic marine mammals are genetically distinct from whales found in the neighbouring Pacific and Antarctic Oceans, suggesting they are a separate group that lives permanently in the region.

While they are not as large as their Antarctic cousins, the New Zealand population can still reach lengths of around 22m.

Their discovery is being hailed as significant because the whales’ home in the South Taranaki Bight is also the setting for several oil and gas rigs and is set to be targeted by seafloor mining operations.

Though blue whales have long been listed as a migrant species in the region, Dr Leigh Torres of the Marine Mammal Institute at Oregon State University was the first to suggest it might be home to a resident population.

This was confirmed when she began conducting expeditions in the South Taranaki Bight to look for signs that it was a blue whale hotspot.

“We had five hydrophones deployed for two years in the South Taranaki Bight and we never heard any Australian blue whale calls – just the local New Zealand population,” Torres said. “When we conducted biopsies of individual whales, we also discovered that they are genetically distinct from other blue whale populations.”

Having established this new population, the scientists now want to determine exactly how many of them there are inhabiting the large bay of South Taranaki Bight. Their current minimum estimate is 718.

Original article by Josh Gabbatiss, The Independent, May 17, 2018.