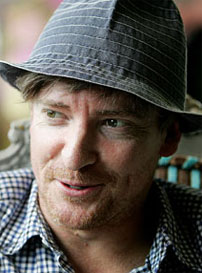 New Zealand-born comedian Rhys Darby, 37, who played manager Murray in the in Flight of the Conchords series, recently performed five shows at Cobb’s Comedy Club in San Francisco. Darby says live comedy remains his passion despite his career also turning to movies, television shows and writing. “I do love standup. No matter what I do with acting and filming various things, it’s still the heart of what comedy is to me. Either making things up off the cuff or telling people personal stories of crazy situations I’ve been in, just getting that instant feedback of live performance.” Along with films, television and comedy shows, Darby, who has been based in Los Angeles since June, has also found time to write a book, due out in April next year; he says his ultimate dream is to be able to live and work back in New Zealand. This month, Darby released his latest DVD It’s Rhys Darby Night.