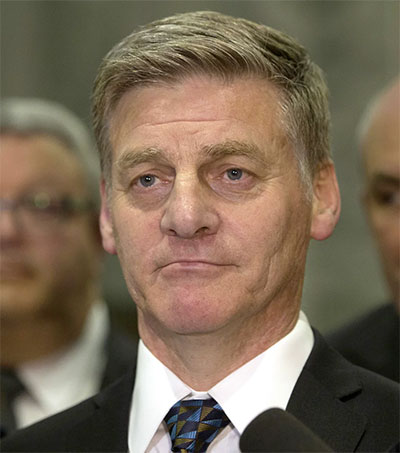 “Now is the right time for me to step aside and embark on new professional and personal challenges. I informed the National caucus this morning that I am resigning as leader of the National Party,” Lumsden-born English said.

“I believe this will give National’s new leader time to prepare the party for the 2020 election. It has been a huge privilege to lead the party and serve in politics.”

English said he would step aside on 27 February and the party would then vote on a new leader and deputy leader to take them to the 2020 election.

The former finance minister said navigating New Zealand through the global financial crisis and helping the economy grow were high points of his time with the party, though leading the country as prime minister was “definitely” his biggest achievement.

English said after nearly three decades in politics he was ready to step out of the spotlight and embark on a new chapter with his family, and that opportunities in business, agriculture and other fields awaited him.

Prime Minister Jacinda Ardern wished Bill English the best on the next phase of his career and said he had worked “tirelessly” in his many roles in parliament.

“He has always stood for what he believes in. He is a man of clear convictions who has always had a genuine concern for the well-being of New Zealanders, and gave a huge portion of his working life to serving on their behalf,” Ardern said.

“The impact of public service on a politician’s family cannot be understated. In the 27 years Bill served as an MP, with the support of his wife Mary, his children were born, and grew up. They have made great sacrifices so he could do his job to the best of his ability.”

Professor Raymond Miller, a political scientist from Auckland University, said despite being in parliament for close to three decades English remained something of an “enigma” and his greatest strength was a perceived stability he brought to government, while his greatest weakness was his enduring “inability to excite the public”.