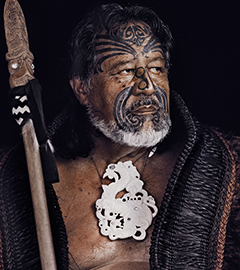 Portrait of a Leader

Maori Party co-leader Pita Sharples features in a photographic exhibition featuring portraits of Tangata whenua, including Sharples.  Sharples was stunningly captured on film by British photographer Jimmy Nelson, who was touring the world recording images of the lives and traditions of indigenous tribes before they are lost to the world due to modernising globalisation.

Nelson didn’t even realise he was photographing the Minister of Maori Affairs when the artist set up a temporary studio at the Te Matatini national kapa haka festival in Gisborne in 2011.

He chose the Sharples portrait above hundreds of other candidates because of its power and imagery. The minister, who can take a lot of credit for the national revival of kapa haka tradition, was pictured in full tribal regalia, including temporary ta moko.

The exhibition predominantly covers developing nations, in which many tribespeople still live the traditional ways established over millennia. Nelson calls them the last untouched people.

He chose to include Maori because they were an example of a people who survived colonisation and development. ”Maori are really starting to get a grip on their history and identity but they’re bringing that in a balanced way into the contemporary world,” Nelson said.