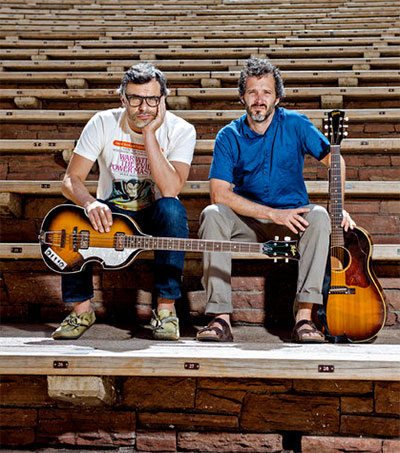 Flight of the Conchords Aimless and That’s Okay

There was a time, about 10 years ago, when this unassuming pair seemed to have it all figured out in their own quiet way. The Flight of the Conchords had a well-received HBO series and two Top 20 albums, as well as a Grammy for an earlier EP, New York Times correspondent Dave Itzkoff writes in a feature about New Zealand performers Jemaine Clement and Bret McKenzie.

They also had (and still have) a bluntness about their careers – a lack of interest in familiar enticements like wealth and fame, if not an outright cynicism about the entertainment industry – that can be mistaken for their authentically low-key demeanours.

So it was a shock to fans when, in 2009, Clement and McKenzie boldly walked away from their HBO series, Flight of the Conchords, which they produced in New York and starred in for two seasons. They put their partnership on pause and returned home to Wellington.

Even in its absence, Flight of the Conchords continued to have an impact. The bohemian ethos of the HBO series has been carried forward in comedies like Girls and Broad City; the homegrown comedy-music videos they specialised in have helped spawn a viral internet culture and become staples of late-night talk shows.

Seven years later, the bandmates neither take credit for these developments nor feel that they missed out on them, and they say they are happy with their solo trajectories.

Along with the grey hairs in their beards, they each now have wives and children. Clement has starred in movies like Men in Black 3 and The BFG, and McKenzie won an Academy Award for a song he wrote for The Muppets.

On their present itinerary through the United States, they have nothing to figure out (except a few new songs) and nothing to promote (except themselves). They find themselves playing in bigger spaces than they wished to more admirers than they thought they had.

Clement and McKenzie also each have a slate of personal assignments to keep busy: McKenzie is writing a film adaptation of the Neil Gaiman children’s book Fortunately, the Milk, and Clement is working on an unspecified TV project, happy not to be writing more music.