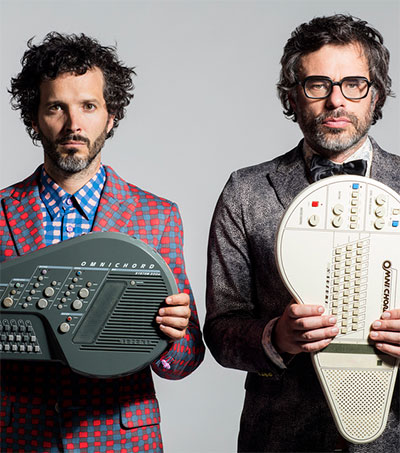 Flight of the Conchords Announce US Tour

The Flight of the Conchords return to stages in the United States playing at nearly 30 locations across the country in June and July, the first time the duo has toured since co-headlining 2013’s travelling Oddball Comedy & Curiosity Festival with Dave Chappelle.

“I’m thrilled to get back on the road with over half the original band,” Flight of the Conchords’ Bret McKenzie said in a press release.

McKenzie, 39, will be joined by fellow New Zealander Jemaine Clement, 42, for the tour, which has stops planned at marquee locations including Colorado’s Red Rocks Amphitheatre on 12 July and New York’s Central Park Summerstage on 24 July. According to the release, the duo has “new material in the works, which they’ll showcase exclusively at these shows.”

McKenzie and Clement formed Flight of the Conchords in 1998 when they were at Victoria University, but the group didn’t break through to the mainstream until 2007. The group’s EP from that year, The Distant Future, won the 2008 Grammy Award for Best Comedy Album. Flight of the Conchords, the band’s HBO comedy series, debuted in 2007 and was nominated for seven Emmys over its two seasons.