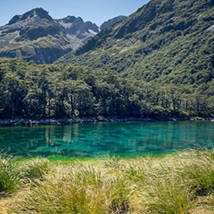 Blue Lake in Nelson Lakes National Park is the clearest fresh water lake in the world, with visibility ranging between 70 -80 metres. Entering the lake is strictly prohibited and is located in a restricted conservation area.  Photographer Klaus Thymann, working closely with the New Zealand Department of Conservation, was recently given the rare opportunity to dive into the lake and take its ‘first-ever photos’, published in the Guardian. Water is fed to Blue Lake from nearby glacial lake, Lake Constance; water travels through landslide debris between the two lakes that form a dam. The dam filters out any particles in the water before it entering Blue Lake, giving the lake an intense natural blue-violet colour. A hole at the bottom of the lake allows water to flow out, with the lakes entire body of water being replaced in around 24 hours. The lake is scared to the local iwi, Ngati Apa, who were consulted before the dive. The iwi traditionally used the lake to cleanse the bones and release the spirits of the dead. In a 2010 Treaty settlement the Lake was returned to the into Tribal ownership and given back to the New Zealand government.