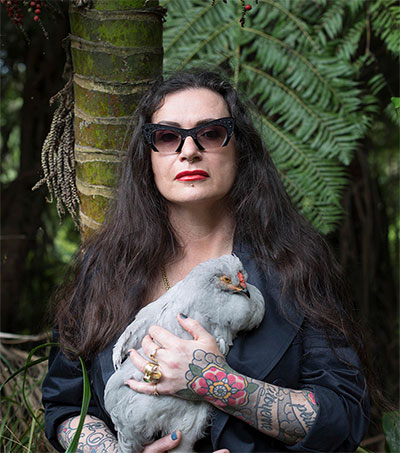 New Zealand photographer Fiona Pardington has been named a Knight (Chevalier) in the Order of Arts and Letters by French Prime Minister Manuel Valls at a ceremony held at the Auckland War Memorial Museum.

Pardington is the first New Zealand visual artist to receive this honour, which recognises eminent artists and writers who have contributed significantly to furthering the arts in France and throughout the world. Other recipients include Sir Peter Jackson (who was also named at the ceremony), George Clooney, Olafur Eliasson, Hou Hanru, Cate Blanchette, Uma Thurman, Tim Burton, Rudolf Nureyev and William S. Burroughs.

Pardington said the award was for a work called The Pressure of Sunlight Falling, which she did while completing an artist’s residency in France in 2010. The photographs were of anthropological plaster casts created by one of the expedition members on board Dumont d’Urville’s voyage through the Pacific in the 19th century.

Receiving the honour was a complete shock, Pardington said.

Getting access to museum archives and exhibits during her French residency had been difficult, as they were often jealously guarded by their curators, she said.

The honour would hopefully make gaining that access easier in the future.

“That’s the first thing I thought. It was just like all my Christmases came at once … This could be my golden ticket, because they are almost impenetrable unless you have someone ushering you in.”

A retrospective of Pardington’s work, A Beautiful Hesitation – including several photographs from her time in France – is on display at the Auckland Art Gallery until 19 June.

Pardington has been selected for the first Honolulu Biennale, to be held in 2017.