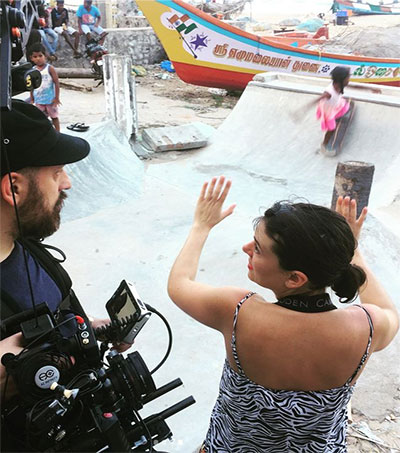 New Zealand-born filmmaker and director Sasha Rainbow explains what a six-year-old Indian skateboarder taught her about life in a story for HuffPost UK.

“Kamali’s defiance of gender boundaries showed me we all have the power to change the world – no matter how small,” Rainbow writes for the publication.

“Researching an idea around filming the burgeoning female skateboarding movement, I came across an image online – a little girl, just six, barefoot on a skateboard in a pretty dress, speeding down a ramp. I’m not sure that I’d ever seen such determination, freedom and pleasure on a young child’s face. It was all-powerful, like she was a symbol for unlocking the potential in all of us.

“I was determined to find this bold six-year-old in a country of more than a billion people. After a week of digging we located Kamali [Prakash], and convinced her mother, Suganthi, to leave their fishing village [of Mahabalipuram in Tamil Nadu] for the first time, and head to the big city of Bangalore to be a part of it.

“Suganthi saw her daughter had found a passion for skateboarding, and despite the judgement of her whole community and family, was allowing Kamali to do something just for pleasure. This, it seemed, was the key to what was different about skateboarding. Yes, many a girl has been allowed to play a sport. But to do something for the sake of it? For fun? This felt different. I knew I had to tell their story in full.

“I had planned to tell Kamali’s family’s story in a wider context of the whole community, who were opposed to Kamali skateboarding at the time, believing her mother was putting her at risk of injuring herself, and thus jeopardising her ability to marry her off. But the community wouldn’t tell us this directly. Somehow, this forced us to focus on Kamali and her mother’s story, highlighting the much larger subject of generational change happening in India, and the surprising twist that Kamali’s mother, in a fight to empower her daughter through skateboarding, ended up empowering herself in the process. I too, felt like I was finding my voice, as a filmmaker.

“When I first started investigating a young girl on a skateboard, I never could have expected how inspired I would be by her family and their bravery to share so deeply. It motivated me to delve into my own family story, which I am writing as my first feature film, a twisted, fictional black comedy about a young woman who travels back to New Zealand when her father dies and discovers he’s left his estate to a mysterious young man.

“If I had to narrow it down to one lesson I’ve learnt from Kamali and her mother, it would be this: we all have the power to change. It’ll be awkward, but our voices and our actions are our weapons. Kamali and her mother’s story reminded me; stand up for what you believe in and always be curious. Your life is worth something.”

Amongst other accolades, Kamali won the Best Documentary Award at the 2019 Atlanta Film Festival, qualifying for the 2020 Oscar shortlist.