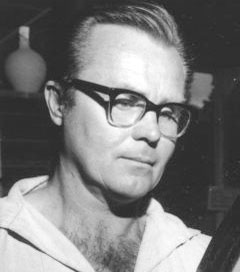 New Zealand-based potter Mirek Smíšek, who won fame with his ceramic artifacts for the Lord of the Rings film trilogy, has died in Wellington, aged 88. Smíšek and his wife made some 700 vases, cups and other ceramic items that reflected the spirit of the imaginary setting in the films. Smíšek, who was born in born in 1925 in Czechoslovakia, joined the anti-Nazi resistance movement before his arrest. He spent most of WWII in Nazi forced labour camps. After the communist coup in Czechoslovakia in 1948, he fled abroad. First he moved to Australia and later he settled down in Auckland, where he became the first independent artistic ceramicist. Throughout his life Smíšek was driven to create functional domestic ware, as a response to his earlier exposure to the atrocities of war in Europe, where he had been imprisoned and seen many horrors. “I think my experiences during the war – horror upon horror – had the effect on me that I was subconsciously worried about humanity. I had seen children suffer, women suffer, who were totally innocent of the barbaric activities of men. I got that somehow the answer was to be creative,” Smíšek said. He lived in Nelson from 1952-68, starting off at the then Nelson Brick and Pipe Company, where he learnt the technique of salt glazing, then moved on to set up his own studio, frustrated by the lack of interest in what he saw as progress and innovation. In the 1960s and 70s he worked and studied with international pottery masters Bernard Leach and Shoji Hamada at St Ives, Cornwall, and in Japan. From 1968, Smíšek established three studio potteries on the Kapiti Coast – at Manakau, Te Horo and Waikanae. His passing has coincided with a major exhibition of his works at the New Zealand Academy of Fine Arts in Wellington. Titled 60 Years 60 Pots, works have come from private and public collections throughout New Zealand. The show was curated by Gary Fremantle, who said Smíšek was, “a survivor who has maintained a strong sense of integrity to his creative convictions, has remained resolutely a potter: a maker of functional pottery that is designed to be used, combining the dual pleasures of function and aesthetics. That is why his artform is social – it relates to people and their activities. In this way his work comes alive when people are together and the pots are being used for their intended purpose”. In 2011, Czech Foreign Minister Karel Schwarzenberg presented Smíšek with the Gratias Agit award for promoting the Czech Republic’s good name abroad.